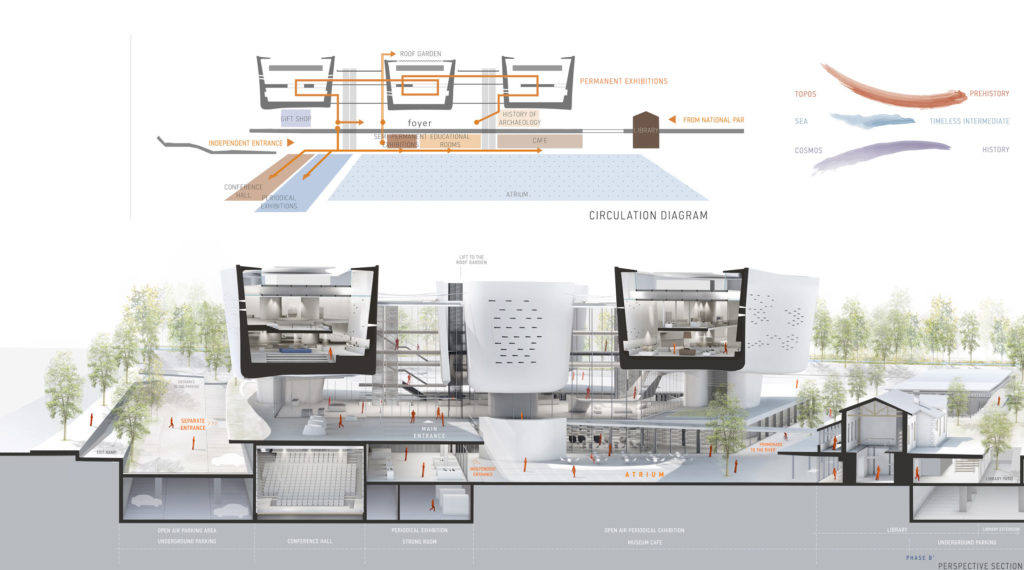 This is an international architectural, two-phase competition that lasted 8 months. In the first phase, among 129 entries, seven propositions were selected, and in the second phase, three awards were given by the 9 members jury, in which Sir Peter Cook and Elias Zengelis took part.

The new museum will host one of the largest collections of Cypriot archeology, projecting into international scope the history and the culture of Cyprus.

The particularity of an archaeological museum is that it hosts a world that comes from the bowels of earth. The residues of human life, humble or precious, clumsy or artifacts, that the earth preserved offering them the value of priceless. With this value they were rediscovered by the humans, digging into the earth to find their identity. They are the distant traces of everyday people, the archetype offspring of human life. Anthropocentric prototypes of chronic soul. What should be then the new environment for something that comes back to light? The proposal suggests to be raised from the soil, and declare its presence to modern humans. Since when something returns from obscurity and oblivion becomes collective memory and belongs to all. Needs a new protected environment, but which communicates, receives and diffuses in the city.

It is the hovering cloud of a distinctive heritage, which while longer belongs to all – is global -, it cannot leave because is attracted from the Cypriot land of its birth and thus levitates but remains motionless –it is “meteor” -, unable to be separated from the terra.

The intention for highlighting the archeological finds from the excavation and the past to the light and the present time, led to elevate the museum, thus allowing for the ground level to remain free and be formed with various qualities. As a result, is created a new spatial stratigraphy composed by three horizontal zones. The upper zone with the hovering body of the museum – the Memory layer. The intermediate zone that welcomes the city – the City layer. The lower zone – the River layer – which hosts everyday functions, is organized around the museum’s atriums and extends to the new park of Pedios river.

The content of the permanent exhibition defined the architectural proposal with the division of three spatial and conceptual entities, each one corresponding on one of the lifted volumes. TOPOS, narrates prehistory and focuses on the relations of the first settlers with the land and its resources. SEA, focuses on the continuous relation between the island and the sea – the timeless intermediate. COSMOS, concerns the historical times, focusing on the relations and the interactions between Mediterranean cultures.

The new archaeological museum -within today’s globalized reality- seeks to express its identity through the elements that gave birth to the Cypriot civilization, not only the materials, but also the characteristics of the Mediterranean life and culture that are still alive in the everyday life of the locus. It aims to be a cultural installation that would nurture new environments and behaviors, and act as a revitalizing gesture to the city.